Home again and still recovering from our journey. Everyones internal clock is a bit out of whack and the kids have been wandering down to our room around midnight unable to fall asleep. But it was all worth it. Matt and I were just discussing last night how great the kids did throughout the trip. We really asked a lot of them this past week; a 15 hour flight, hundreds of subway stairs, miles of walking, different food, language barriers, ect ect. But they were troopers and this experience has really opened the door to so many more destinations we once thought too difficult for them. Hummmmm... I wonder....... Reflecting back I have so many favorite moments. At the top was Andrew at KSS. I want to send a huge thank you to KSS & FAC for allowing us to visit and making it possible for Andrew to meet Mrs Lee. 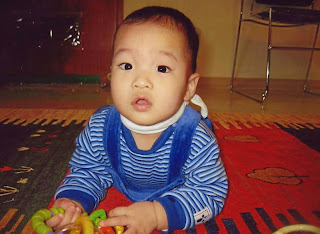 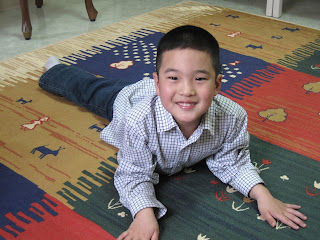 I loved watching Sydney blossom into a little shopper. She wasn't quite ready to negotiate pricing but she was more willing to spend hours shopping than ever before. Grandma Franny will be so proud. She was also fascinated by the subway; everything from reloading her transit card, reading the signage and counting the # of stops.

Andrew says he liked Namdaemun Market the best because they had Angry Bird shirts there.
Posted by The Lavelle Family at 11:52 AM No comments:

As our trip winds to a close I am surprised how good our kids have become at maneuvering around Seoul. Coming from Ohio they really have little experience with public transportation or crowds. Compared to Seoul where the taxis, subways and massive amounts of people are a part of daily life. Now they are driving through the subway train doors & hiking the hundreds of stairs with the best of them. I was simply amazed by their endurance and ability to adapt.

There is no doubt we are the giant pink elephant everywhere we go; the stares, the whispers. However, I was not really surprised by this. Korea is extremely homogeneous and we couldn’t have been more opposite; Caucasians toting a blond haired daughter and Korean son. Some would attempt to ask us the situation, others would just point and whisper and my favorite the pat on the head or random hug.
For Sydney she had her blonde hair pet my by more strangers than ever before. 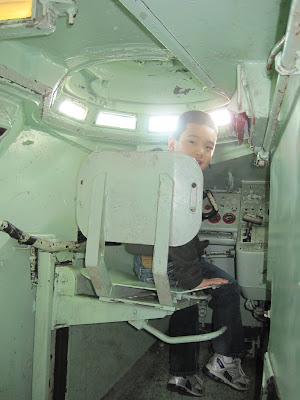 We stopped by the Korean War Museum, which was enormous. I wish we could have explored it more but we were trying to conserve the children’s energy. 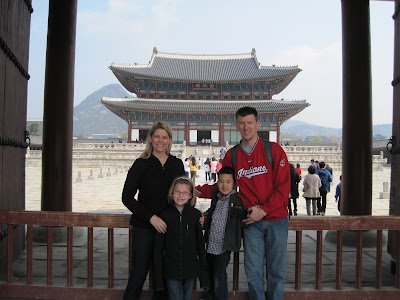 We also took the kids to watch the changing of the guard at Gyeongbokgung Palace. 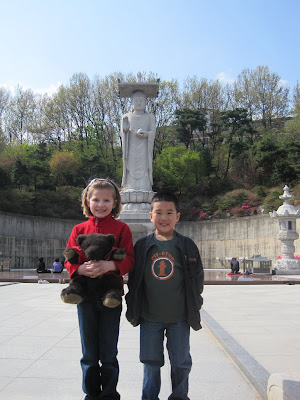 Then headed over to Bongeunsa (봉은사) one of Korea’s oldest Buddhist temples founded in 794. A wonderfully beautiful place with brightly colored lanterns & detailed architecture; a true escape from the hustle and bustle of the surrounding city. We were free to move about the grounds and peak in the buildings although I did refrained from taking many pictures as this is a very active temple. The constant sound of monks chanting & monk bell tapping must of have had Sydney feeling quite Zen. She decided to give Buddhism a try and took her place on the floor and gave traditional bows. 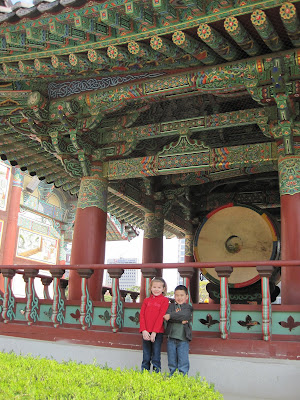 Posted by The Lavelle Family at 10:13 PM No comments: 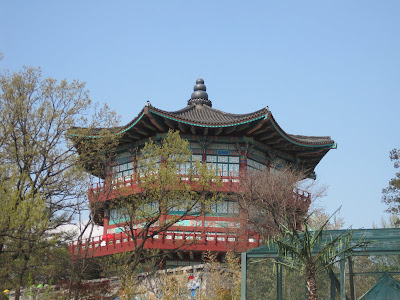 We walked the kids to death today but we saw all a ton of what Seoul has to offer. Starting with the Buddhist temple of Bukhansan where we all rubbed Buddha’s belly for luck. 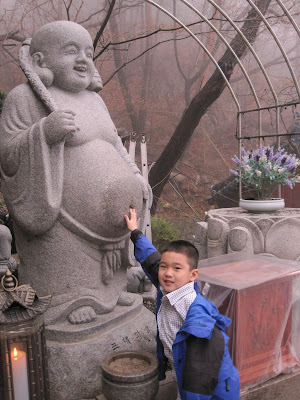 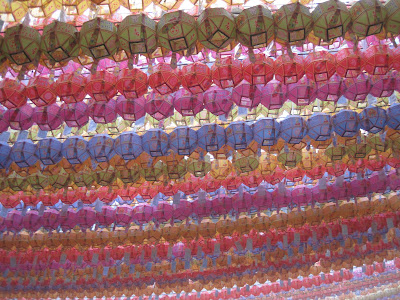 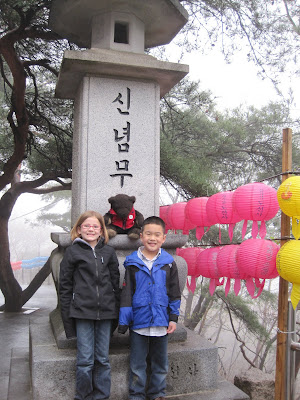 Then over to Bukchon Village, an area famous for its traditional Korean homes called hanoks. The ornate roof lines and detailed woodwork was beautiful and a far contrast to the skyscrapers in the distance. 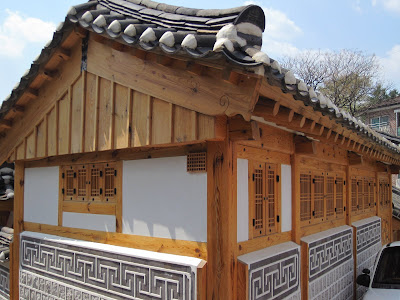 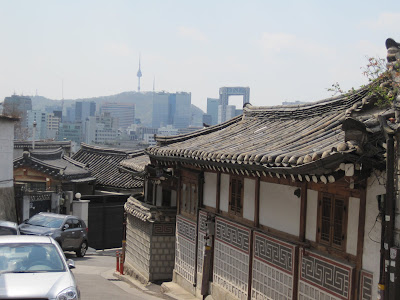 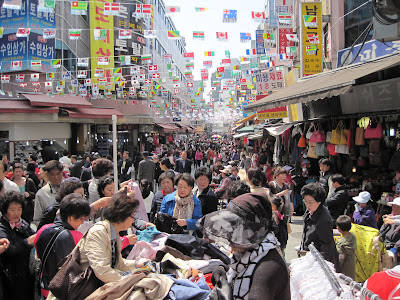 Followed by Children's Grand Park. A huge park with an amphitheater, playground, zoo and amusement park. The zoo by the way had an interesting exotic animal on display…….the guinea pig. The kids took on their first big roller coaster, a corkscrew loop.
Posted by The Lavelle Family at 6:43 PM No comments: 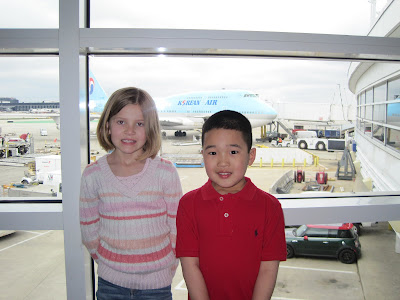 To bring everyone quickly up to speed……. we found out a few weeks ago that Andrew’s orphanage in Korea would be closing. It was always our plan to have Andrew visit Korea several times during his adolences but didn’t plan to make the first trip until he was about 8 years old. I had always envisioned him visiting the orphanage and having the opportunity to meet his foster mother & caretakers. With this closing quickly approaching we decided we didn’t want him to miss out on what maybe his last opportunity to see KSS operating as an orphanage. Soooooo… on Wednesday all four of us boarded Korean Air for the 15 hour flight to Seoul. The kids did great, much better than we expected. Especially after they asked “are we were there yet?” 7 times before we even reached the Cleveland airport.
To help combat jetlag and a 13 hour time difference we did our best to keep the kids awake the entire flight. Andrew however, ended up taking a 2-3 hour nap. After two dinners, a couple movies, games & coloring we touched down in the Land Of Morning Calm. Immigration and baggage claim went flawlessly and we were headed via taxi to our hotel, Renaissance Seoul in the Gangnum district.
About 4:30 AM everyone was bright eyed, dressed and ready to see Seoul. I knew there was only one place open at that hour……. Noryangjin Fish Market. An enormous warehouse where live seafood is auctioned & sold to hundreds of local vendors. Sydney’s first reaction was to hold her nose but soon her visual sensory took over as she laid her eyes on every sea creature imaginable. Andrew smiled and said “I love Korea”. 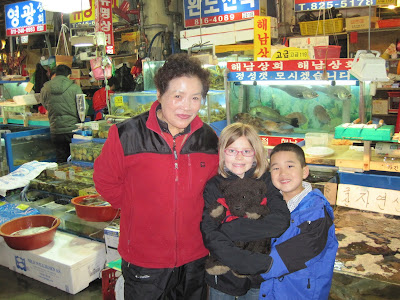 A lovely woman took a real liking to Sydney & her blonde hair and wanted to keep her. She was happy to show off her goods and let me pet an octopus which Matt later purchased & ate! Yep, for 10,000 won we purchased 3 small octopuses which she tossed into a plastic grocery bag and directed us to a small restaurant for preparation. We took off our shoes as we entered the tiny restaurant, handed over the grocery bag and were seated on the floor at a small table. Couple chops in the kitchen and out came the octopus on a platter, still wiggling. Matt wrangled a few with his chopstick; a quick dip in wasabi and down the hatch they went. Ummmm, breakfast of champions. The kids & I decided to pass and enjoyed breakfast at my favorite restaurant Paris Baguette. 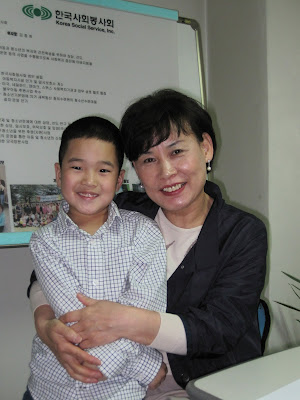 That afternoon we headed over KSS (Korea Social Services) to meet Mrs. Lee, Andrew’s foster mother. Making the day even more special it was Andrew’s Gotcha Day. Exactly five years ago Andrew left Mrs Lee and made his way to the US. Her warm smile lit up the room and she entered and said, Min Shik! She said he looks the same but bigger. With the help of an interpreter we exchanged some gifts, email addresses and shared some pictures. She was very happy to hear all about Andrew’s hobbies and school work. We even discussed his asthma as he had been sick several times during his time with her. Mrs. Lee is still fostering children and figures shes had over 50 children in her care over the last 20 years. 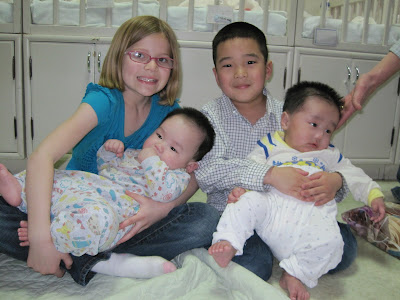 Afterwards we headed upstairs to meet with four foster mothers who brought in their babies in for updates. Updates are a progress report of sort which updates the adoptive family of their growth, personality and health. We also toured the nursery and got a baby fix.
Posted by The Lavelle Family at 7:40 PM 1 comment: 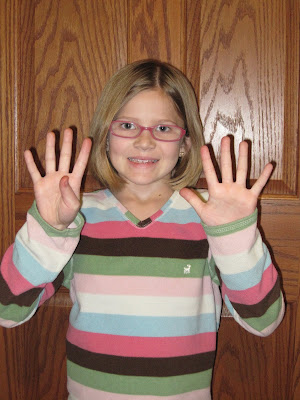 Posted by The Lavelle Family at 8:28 PM No comments: 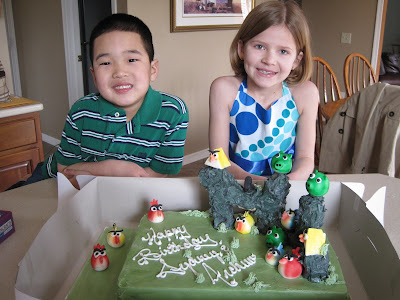 April is always jammed packed with special events and this year is no exception. Two birthdays, Easter, Gotcha Day and this year decided to toss in a unexpected trip to Korea.

On Saturday Sydney had several friends over for pizza and then we took them all to see the movie Hop. 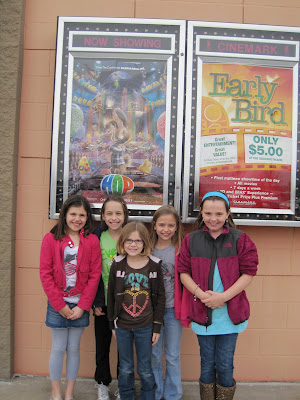 Sunday the whole family joined us for a BBQ lunch to celebrate both the kids birthdays & an early Easter. We were also pleased that Cheng could join us to experience all the traditions of Easter. He colored his first Easter egg & had an egg hunt. 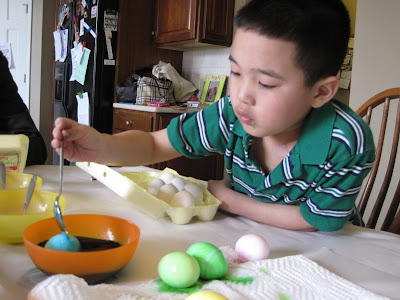 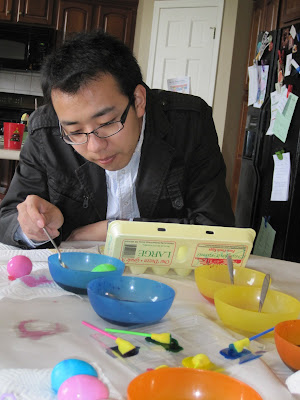 Posted by The Lavelle Family at 2:02 PM No comments: 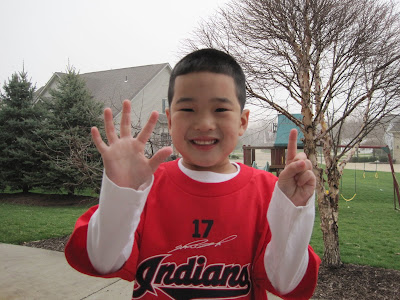 Andrew turned 6 years old today!!! He & Matt spent the day together golfing and watching the Indians vs Red Socks. They got great seats on the baseline and made a big poster written in Korean Hangul hoping to lure over the Indian's Korean outfielder, Shin Shoo Choo but struck out. Oh well!
Posted by The Lavelle Family at 7:16 PM No comments: