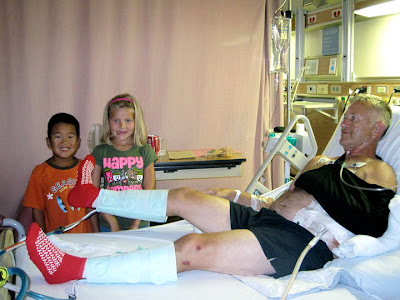 My dad who has been a serious cyclist for many years now had his first crash on Saturday. I guess it was just a matter of time. Thankfully, he was close to home and was riding with friends. He was transported to Mercy Hospital via ambulance where they found he had 4 broken ribs and a broken collar bone. He was released home but by Monday was in so much pain my mom took him back into Mercy rather than his orthopedic appointment. A CAT scan revealed bleeding between his ribs and left lung. They inserted a chest tube to drain the blood and he has been feeling much better.

Much to our surprise he has been a pleasant cooperative patient. :) But he is anxious to get home. Angie has trying to tide him over with Tour de France on the laptop. But he is still thinking about the new Trek Madone bicycle that is due to arrive in a few weeks.

Unfortunately, he will have to wait awhile longer. After this mornings consultation with Dr Sandhu the cardiothoracic surgeon, it looks like they need to go in and remove the excess blood that is not draining on it's own. He is scheduled for a 2-3 hour surgery Friday morning.
Posted by The Lavelle Family at 3:54 PM No comments: 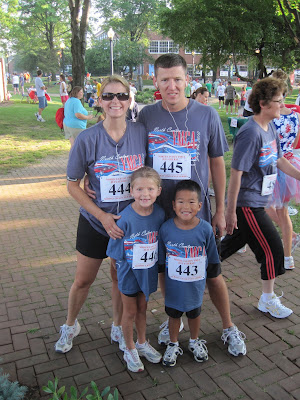 We entered the whole family in the North Canton Race this year. My mom, Angie & David took on the 5 mile course, while The Lavelle's opted for the 2 mile. Even with an 8:15 AM start time the sun & heat were intense. Matt finished 7th in his age group at 14:32. Sydney & Avery came in at 32:21. Andrew and Claire walked the whole course without being carried which was an achievement in itself and dashed across the line at 36:16.

Congratulations to my Mom who placed 4th in her age bracket!!! 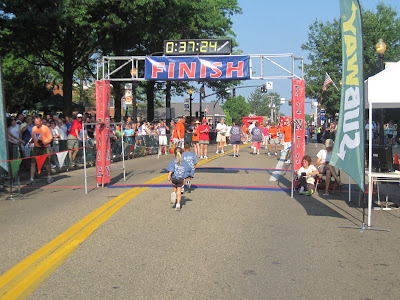 Posted by The Lavelle Family at 11:58 AM No comments: