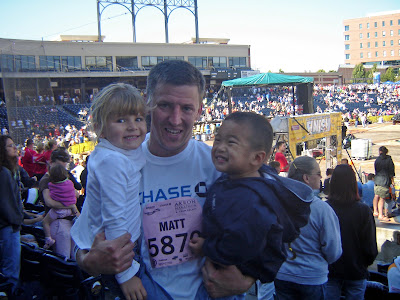 The Chase Bank Team finished the 26 mile Akron Marathon today in just under 4 hours. Matt was the final runner completing the 7 mile leg. He was all out of gas a few miles before the finish line but running into Aeros Stadium with its packed crowd of cheering fans could drive anyone to finish line. Way to go Matt, we are proud of you!
Posted by The Lavelle Family at 8:03 PM No comments: 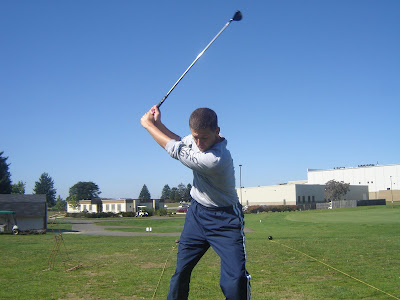 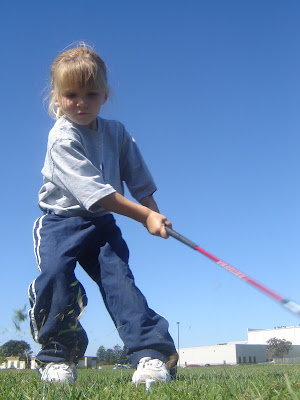 Matt & Sydney headed to the driving range as part of their daddy/daughter day.
Posted by The Lavelle Family at 12:00 PM No comments: 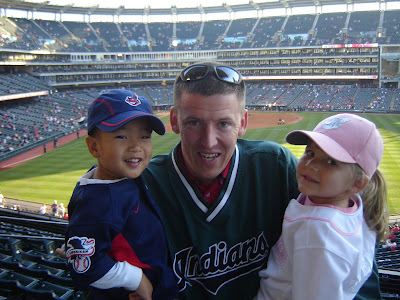 The whole family headed out to the ballpark for Andrew's first MLB game. The Cleveland Indians vs. Detroit Tigers. Our seats were out in near center field but that didn't really matter since none of us really got to watch much of the game.

Sydney placed her overpriced pizza down on the chair then stood up sending her pizza down onto ground as the chair folded up. She then burst in to tears, sending Matt back to the concession stand. Andrew was busy down the aisle discovering all the abandon bits of food on the ground. While I dealt with him Sydney was delivered her new pizza. Which she almost lost again if the man next to us didn't catch it as it descended towards the ground.

Once all dinner was out of the way we did enjoy a few innings. Andrew was clapping, dancing and flirting with the ladies behind us. Sydney kept her hands over her ears most of the time, she didnt like roar of the crowd and fireworks that went off after a homerun. Once she started bugging Matt for Dip n Dots it was time to hit the road.
Posted by The Lavelle Family at 9:28 AM No comments:

The kids got up early today and presented him with their handmade cards before work. Sydney wrote "Happy Birthday Dad Love Sydney" all by herself. She was very proud. Andrew drew a few squiggles on his & insisted I trace his hand.

Then it was off to work. Poor guy, had to work late too.

On Saturday night we picked up Matt's gift. Corn Hole! My dad built it and my mom sewed the bags. He loved it! So much so he hauled it up to the Browns game. He and a few friends tailgated, played cornhole and cheered the Browns onto their first victory of the season.

Happy Birthday Sweetheart!
Posted by The Lavelle Family at 9:38 PM No comments: 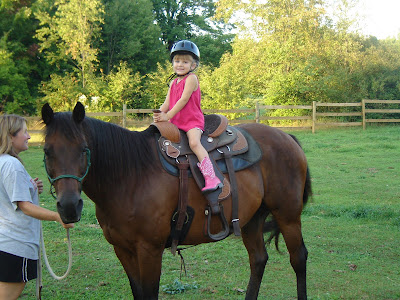 We visited our friends The Eshler's on Sunday. Sydney was in heaven! Horses & tons of barn cats. But, before she could ride she had to help out with the chores. I don't think she minded one bit! Wearing her brand new pink cowboy boots that Grandma Franny got her she mucked the stalls. Thats the fancy equine word for shoveling shit. She finished up by filling the water & feed buckets. Then it was time to bring the horses in from the pasture. She had to stand back until they were all secure in their stalls. After they finished their dinners she gave them each a special treat, an apple, she brought from home.

Rumor, is the most kid friendly horse of the bunch so Sydney gave him a good brushing while Deanna saddled him up. Below are pics of both Sydney & Andrew's ride. Thanks Eshler's! 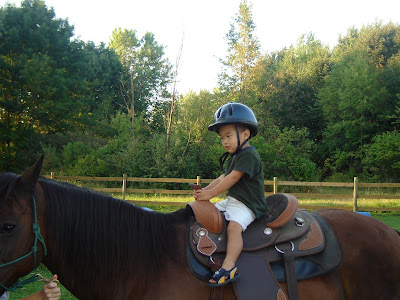 Posted by The Lavelle Family at 1:57 PM No comments: