Hurricane Sandy gave us a very cold, wet and windy Trick or Treat this year.   The kids went out of about an hour with their friends before retreating back to the safety of the house.

Andrew who is still embracing the Star Wars phase went as a jedi and Sydney dressed as an equestrian. 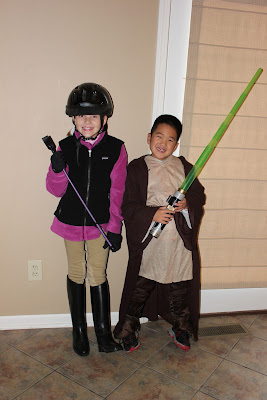 Matt and I also decided to get into the act and threw a Halloween Bash. 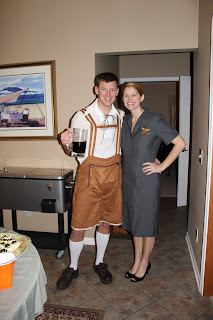 Posted by The Lavelle Family at 1:31 PM No comments: 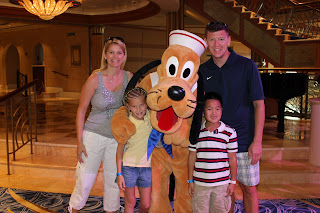 We decided last minute to book a 4 night Disney cruise aboard their brand new ship Disney Dream.  Call it a vacation or "conducting field research".  :)

To add to the excitement we decided not to tell the kids.  We fooled them into thinking we were tagging along with Matt on a business trip to Florida.  Andrew even begged grandma to stay home with her.  He didn't want to go on any boring business trip.  They were convinced they would be spending long hours in a hotel room.

We flew into Orlando on Saturday night and spent the night in Cocoa Beach, Florida.  The next morning we had a casual breakfast and took the rental car for a leisurely drive around town to see what we could spend our time doing.  We pointed out the convention center, putt putt courses, surf shops, beaches, etc.  At exactly 10:30 AM we came over the bridge towards the pier.  The kids saw the ships and squealed with delight.  But, it was quickly over as they knew we were here on business and soon the ships were behind us out of sight........  But wait!!!!!  Ring ring ring........ We had made prior arrangements for Mickey Mouse to call our cell phone at 10:30 AM telling the kids how Disney Cruise Line was looking forward to welcoming them onboard.  Matt and I pulled out the Minnie & Mickey ears we had hidden away and placed them on our heads.  The car erupted in screams.  :)  I wish I could have caught the moment on tape but they may have figured it out. 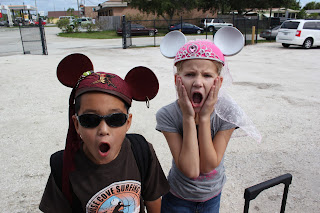 The ship is spectacular! Disney managed to strike a perfect balance between state of the art and timeless elegance.From the gorgeous chandelier in the atrium to the elegant dining rooms and the classic colors used throughout the ship, the impression it leaves is one that is reminiscent of a classic ocean liner. There are countless Disney touches around the ship, but they are understated. The theme of Mickey and friends is whispered quietly throughout the ship but it doesn’t scream Mickey Mouse.


You can’t sail on this ship without acknowledging that Disney is first and foremost and entertainment company. It shows in countless ways on the Dream. This is a big part of what sets Disney apart from competing lines.


I’ve said it before and I will say it again, I am blown away by the children’s programming on Disney Cruise Lines.  I think its what hands down separates DCL from every other cruise lines.  Sydney & Andrew are 10 and 7 so they were able to access the Oceaneer Club & Lab areas which are accessible to potty trained children between ages 3-10.   There is no age separation between the two clubs; however, I found that younger children stayed within the Oceaneer Club, while older stayed in the Oceaneer Lab. Children are free to roam from Club to Lab at their discretion.


At first, this concerned me as it was different than how the Disney Magic operated. The Oceaneer Club & Lab covers a large amount of space. I couldn’t possibly imagine that the counselors could keep an eye on every child at every second. This is unlike other cruise lines where the kids club is a small enclosed space. However, I know Disney always delivers a product that works and I trusted the system in place to track all the children. It turned out they do have a system, and it’s state of the art. Each child wears a GPS wristband at all times during the length of the cruise. While in the kids club, the wristband can pinpoint the exact location of your child when you go to pick them up. This really gives children the freedom to explore whatever area they choose. There are also ongoing activities with counselors throughout the day if your child wishes to participate. Clearly, the system works because my kids did not want to leave the kids club at any point on our cruise.


The shows onboard are magnificent and Broadway caliber, you won’t find anything like it on another cruise lines. Entertainment doesn’t stop at the shows. The character interactions are unlike those at Disney World. Andrew played a scavenger game with Stitch.  Seeing all the Disney princesses standing together at one time.  I even passed Minnie in the hallway on morning.  Even the art on the ship gets on to the act. Many of the pictures on board are what they refer to as “interactive art.” what appears to be a regular picture comes to life when you stop to look at it. 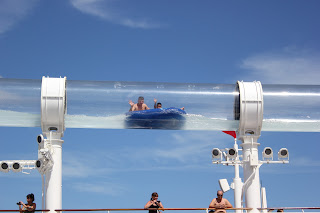 Let’s not forget the AquaDuck! This is 765’ water coaster topped the kids list. This water jet powered coaster propellers guests through transparent tubes high above the decks and even cantilevers out over the ocean.
Another highlight of the week was Andrew's lost tooth.  We got a call from the Lab one morning that Andrew had lost a tooth.  When we arrived he was sporting a badge that says I LOST A TOOTH with a picture of the Cheshire cat from Alice in Wonderland. The youth counselors had told him the tooth fairy doesn't travel out to sea so Tinkerbell handles lost teeth onboard.  Later that evening Andrew spoke with Tinkerbell who assured him she was tight with the tooth fairy and would hook him up.  :)  After much hype the tooth fairy delivered some chocolate coins and $5.00.   Andrew was very pleased.  He was quick to point out that he only received $1.00 for his last big front tooth but this one got $5.00.  It must be Disney magic.  :) 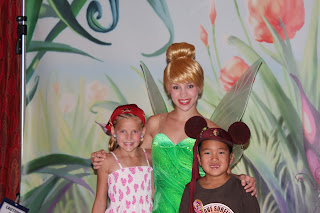 Posted by The Lavelle Family at 6:34 PM No comments: