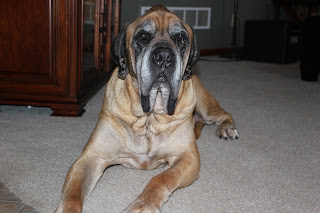 Today I put down my gentle giant, Sullivan.  Since he was a rescue we dont know his exact age but estimate he was about ten years old.  He has been with us for nine years now and has always been an "old soul" since the day he arrived.  He never knew how to play with a toy or fetch a ball.  He much preferred cuddling on the couch or basking in the sun.  And, even in his final moments he left me covered in drool.  Love ya big guy!
Posted by The Lavelle Family at 9:28 PM No comments: 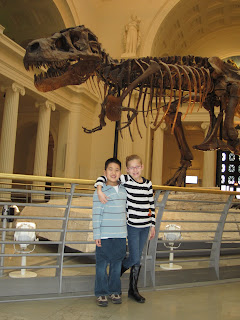 We spend a wonderful weekend in Chicago with the Lavelle Family.   The cold wintry weather didn't stop us from taking in many of the highlights including the Field Museum, the Bean, Lego Store and American Girl.

Posted by The Lavelle Family at 11:42 AM No comments: 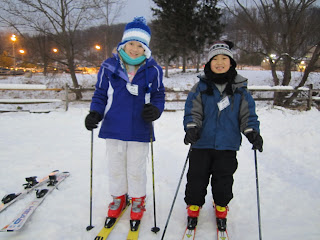 When I think about how much time I spent on the ski slopes as child I feel bad that we have not taken Andrew skiing for the first time until this winter.  I wasn't sure what his reaction would be.  He usually prefers indoor electronic activities if you know what I mean. :)  I took Sydney a few years back and she was quite natural.  However, Andrew never ceases to surprise me. I thought for sure he was going to quit before we ever made it up the tow rope.  Poor guy could not keep his skis together in the grooves and over and over kept falling down causing the whole production to come to a halt and the operator to trek up the hill to reattach his skis.  After a few tears we decided it was best for him to travel up between my between my legs. Ugh, grueling work on moms bad elbow. But, nevertheless we made it.  :)

Andrew was re energized and ready to go.  I was ready to explain snow plow and stop when he says come on mom lets go.  I said but you don't know how to ski or stop.  Down the hill he went.  He prefers the straight down the hill method and when your ready to stop, fall over.  Next time a helmet will be wise investment.  :)   By the end of the night he was trying to make some wider turns and getting on and off the chair lift.

I left Matt who is a novice in charge of Sydney who had only skied one other time.  The two of them managed not to get injured which is a good thing.  During one ride up the lift I was busy explaining to Andrew why we keep our ski tips up when we get close to the exit when I see Sydney falling from the sky.  Apparently, Matt was worried about getting himself off the lift he neglected to make sure Sydney did.  She panicked and jumped when the lift started to make the turn.  I of course had to harass him about it all night.  My mom still gets ragged on about similar story when we were kids.  However, she was so worried about getting us kids off the lift she forgot to get herself off and had to ride the lift around again.  Unfortunately for Matt, he more concerned about himself so we wont let him live this one down. :)   LOL
Posted by The Lavelle Family at 11:41 AM No comments: