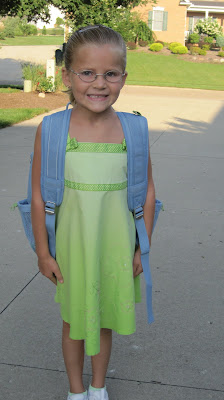 Another school year begins! Last week Sydney was thrilled to receive a letter in the mail from Mrs Burtscher telling her she was assigned to her classroom. Northwood waits until the Friday before school starts to post the class lists so getting the news just one day early was big news in this seven year olds life. She frantically called her two dear friends Kate & Trent hoping they to would receive this letter. Unfortunately for Sydney they had not. The following day we drove over to the school for the posting in hopes she had a few old friends to share the first day with. At precisely 3:00 PM and not a moment sooner up went the lists. Sydney was pleased to see former classmates Peyton, Jacob & Madison. However still a bit sad, I think she was still holding out hope that Kate & Trent just didn't get their letters in time. But, I had no worries. Sydney is very social and will easily have a dozen new friends in various grades by the end of week one.
Posted by The Lavelle Family at 11:43 AM No comments: