Like I mentioned in an earlier post, we are helping out with the "Evening at the Races" fundraising event. It is hosted by our adoption agency and the proceeds will benefit Andrew's orphanage in Korea. Horses are $35 each and give you the chance to win $70 if your horse comes up the winner.

Once you have named your horse, please send your name, the horses name, address, phone number to.....


Make checks payable: Friends of Adoptive Families
Posted by The Lavelle Family at 10:41 PM No comments: 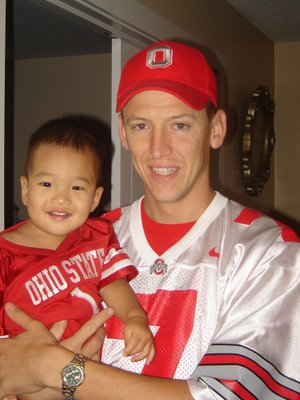 Posted by The Lavelle Family at 2:47 PM No comments:

Matt created a photo video of our trip to Disney. Make sure you turn up the volume on your computer, then use the link below to view or click the title of this page(Disney Video).

I can't say enough about Disney World. It really is the happiest place on earth. We spent 5 glorious nights at the Disney Pop Century Resort and the kids loved every minute. I wondered how Andrew would react to getting back on a plane but he had no problem. He loved saying hello & goodbye to every person he passed. When we arrived in Orlando the Disney staff was waiting with their Mickey gloves on. They called Sydney "Princess" and took her by the hand and led the way to our motor coach. While Andrew napped, Sydney road with her nose pressed to the glass watching for the highway signs to change from green to purple. For those of you who have been to Disney recently know, once you enter Disney property the street signs change color. When they did she jumped up and shouted "Daddy, were at Disneys Worlds", the other passengers chuckled at her delight. 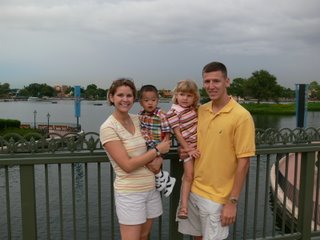 After many unsuccessful attempts to watch the space shuttle launch my mom stopped by for a visit. I think she really enjoyed watching the look on her grandchildren faces as they met each character. Since this was Andrew's first visit he was a bit apprehensive when the characters came near but Sydney on the other hand is an old pro. She is a true believer and in her 4 year old mind, Cinderella lives in that castle and Ariel really does her hair with a dinglehopper. In true Disney fashion the princesses live up to that standard. They never break character even while holding a conversation with an adult.

When we asked Sydney what her favorite part of the week was she said visiting the Bibbidi Bobbidi Boutique. This is a new spot on the Disney map. This salon is for little girls who want to be princesses. They each get their own fairy godmother who does their hair & makeup. Then they get dressed up in a princess costume complete with shoes & purse. Later that evening along with Matt's mom we had dinner with Cinderella, Prince Charming and the Fairy Godmother. 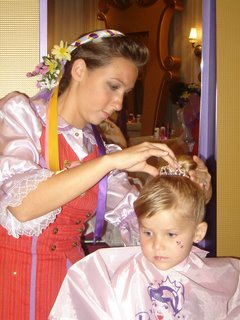 I think Andrew's favorite part was the bus. He would giggle with excitment as we boarded the Disney bus every morning & evening. He would wave and give five to everyone he could and by the end of each ride he had always made a friend. A close second to the bus would be the Lion King Show.
I will post more pictures soon, so keep watching.
Posted by The Lavelle Family at 2:41 PM 1 comment: 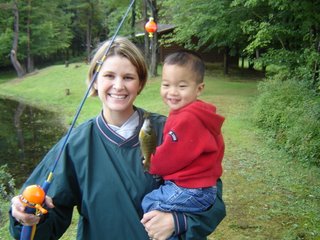 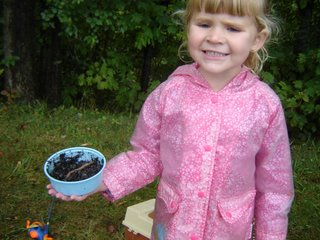 Today was the 2nd annual playgroup fishing picnic. Every month I get together with some of my sorority sisters and their kids for a playgroup. Then on Labor Day weekend we invite the dads and have a fishing picnic at my friends, Bob's cabin. The kids have a great time reeling in the blue gill and flinging seaweed at each other. I think Sydney's favorite thing is the worms.
Posted by The Lavelle Family at 5:31 PM No comments: